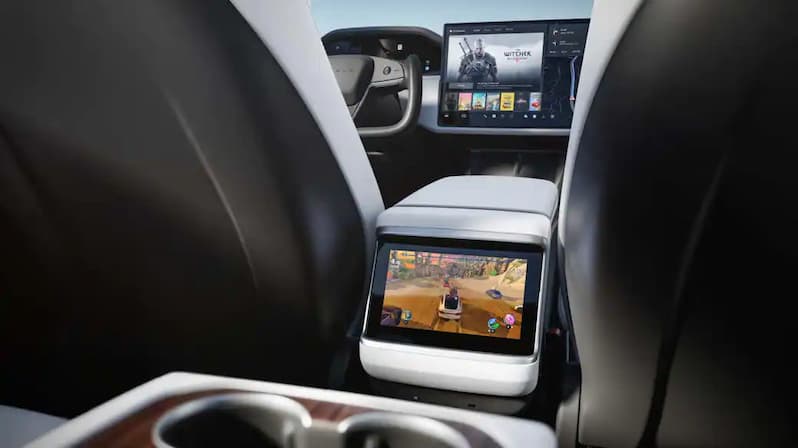 As you probably know by now, Tesla vehicles are loads of fun! From the sporty performance on the road, to the advanced Infotainment System in the car.

Part of the Infotainment system is Tesla Arcade and a whole host of games that you can play right inside your car. And with the release of the Tesla Model S plaid for a rear screen, it is becoming even more necessary, right?

But what fun is playing games inside your car without the a Tesla compatible game controller?

When it comes to Tesla Game Controllers there are two main types you can use.

The simplest way to get a controller for gaming in a Tesla is to use one from your game console at home.

If you have a wired controller for your XBox or Playstation, that is a great place to start.

TIP: Some people have reported that Wired Controllers do not work in the front console USB ports, so if that happens to you, try the ones inside the console instead. They apparently work.

Another issue people have reported with the PS4 wired game controller is the micro USB cable. When they changed it, it worked.

This is a standard XBox Wired controller from PowerA that you can grab for a reasonable price on Amazon. It has all the functionality that you need.

Wireless controllers are obviously a way better option for Tesla vehicles, but you have to find the right one.

BEWARE: Many original gaming console controllers will need to be used with a USB adapter for Bluetooth, so keep that in mind. More on that further down in the Adapters section.

If you want to use one of the best wireless controllers on the market, then grab an original Xbox Core Wireless Controller. It is made by Microsoft to go with the current Xbox, so you know it is state of the art.

Something like the Xbox One Wireless Controller will also work.

The Swiss quality controllers from Logitech are always a great option. The Logitech F710 Wireless controller is a generic controller that will work out of the box in your Tesla.

If you need an adapter to make your wirless controller work in your Tesla, then these are the two that you will want to try.

The most popular and best USB adapter for getting your Tesla Gaming Controller to work is the one from Mayflash. It enables you to connect the controller via Bluetooth to the car and use the controller wirelessly. Just plug it straight into your Tesla USB port.

According to Mayflash it works with

Nintendo has also produced a Wireless USB Adapter called the 8BitDo. It is another quality piece of gear that will help you connect your:

Another issue you might run into when adding a game controller to your Tesla is running out of USB ports.

If you don’t have enough, then you will simply have to add a USB hub!

If you have a Model 3 or a Model Y then this USB Hub from Taptes is the way to go. It is specifically designed to slot into the front of your Tesla and offers a 5 in 1 USB system that includes:

One of the simplest way to extend your USB options is with this affordable option from Anker. It makes connecting both your game controllers and any other devices a breeze.