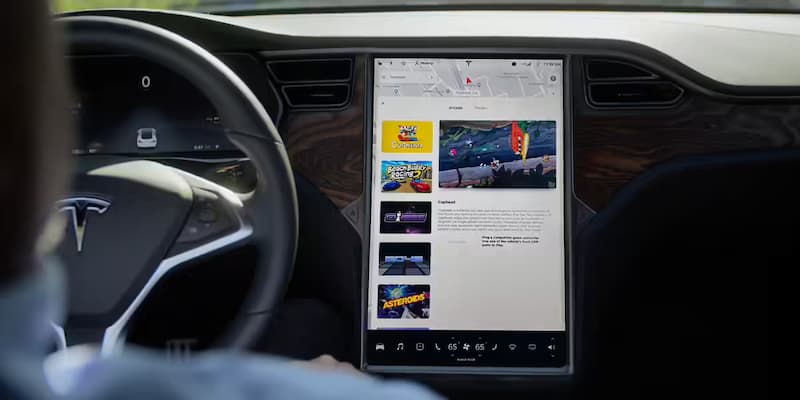 The Infotainment System in your Tesla runs on a chip called an MCU – Media Control Unit.

It is the heart behind the Infotainment features such as

The original MCU in older vehicles such as the original Model S and Model X can certainly do a lot of things, but the pace is fast in the computer world. As we all know from desktops, laptops and smartphones.

Why Upgrade the Tesla Infotainment To MCU2?

Upgrading your Tesla Infotainment System to MCU2 comes with a lot of advantages. It provides you with a more responsive touchscreen, but also access to a range of newer apps that do not work with the original MCU. Some examples include:

Other advantages of the newer MCU2 include:

Ultimately, all the modern extras and fun you expect to use in your Tesla, especially while parked are not all there in the older version of the Media Control Unit.

Also be aware, that you will have to upgrade to the Premium Connectivity subscription if you want to access continuous data while driving (ie. not on wifi at home) for things like video streaming and gaming.

So, if you want to use your Tesla screen for all those things, an infotainment upgrade to the MCU2 is definitely worth it.

Downside Of Upgrading to MCU2

It is worth mentioning that there are a few downsides to upgrading to MCU2. After all, Tesla has changed the infotainment system significantly, so it is no surprise that a few of the older features no longer work.

The infotainment upgrade means that the AM and FM radio, and Sirius XM radio will no longer function. This is a result of the old radio antenna which is not compatible with the upgraded infotainment MCU2. Of course, if you use streaming like Spotify, this is not an issue.

If you do need a radio in your Tesla vehicle, you will have to buy the Radio Upgrade. It costs around $500, and perhaps if you push Tesla, they may pay for it?

The original MCU or MCU1 was in all Teslas up until March 2018. It was a Nvidia Tegra 3 chipset that also had a limited memory (8 Gig) and some glitches as a result.

The MCU2 upgraded chip was installed in all Model 3 and Model Y vehicles, and other models depending on their date of production in 2018. The chipset for the MCU2 was based on the Intel Atom E8000 series with 64GB eMMC. with an external Bluetooth antenna and 5 GHz Wifi support.

Those wishing to upgrade their MCU1 to MCU2 on their Model S or Model X can undergo a retrofit at your local Tesla Service center for a cost. You can schedule a service appointment via your Tesla App.

What Does An MCU Upgrade Cost?

If you take the Radio upgrade, be aware, it might run $500 more.

For an exact cost of the infotainment upgrade you will need to consult your local Tesla Service center when doing this for your older Model S or Model X.