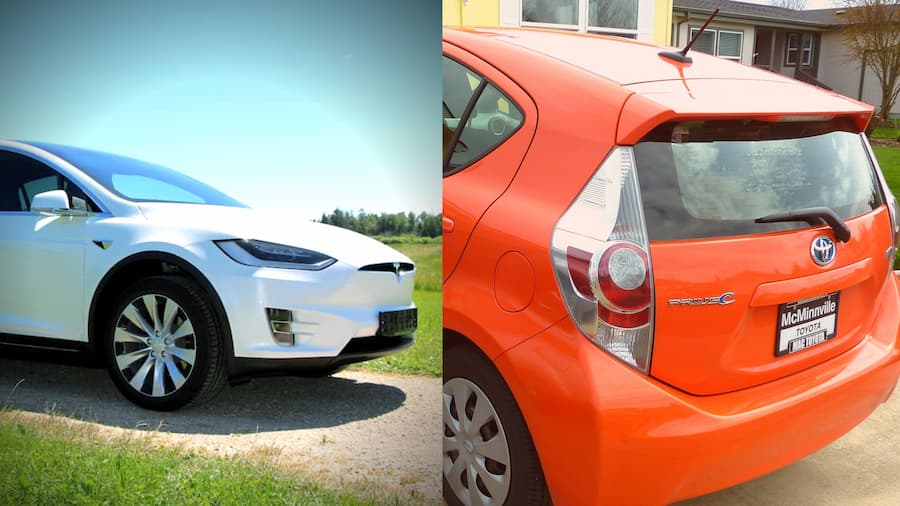 One of the most confusing choices when buying a new car right now is deciding between Electric vs Hybrid cars.

Especially given there is so much misinformation out there about Electric Vehicles, I thought it was worth putting a few myths to rest.

What’s the difference between an electric car and a hybrid car?

The main difference between hybrid and electric vehicles is that with electric cars you can only drive as far as the battery allows. Whereas with a hybrid you can use gas when the battery runs out.

This is because hybrids have two powertrains, or engines, a standard internal combustion engine, and a battery with an electric motor. Of course, this also makes things far more complex.

If you ask me, in almost all cases electric cars beat hybrid cars hands down. No matter whether you are talking old-school hybrid vehicles, or the more modern plug-in hybrids. More on that difference later.

Most people complain that electric cars do not have enough range.

If you take a Tesla Model Y Performance, which is one of the most popular models, it has around 300 miles of range. And most gas cars are lucky to make it to 400 miles. So, the difference is not large. And electric cars are getting more efficient, and the batteries better, every year!

Now, considering that the majority of your drives are shorter distances, with the average being 29 miles per day. So, the only time you need to charge while driving is when you go on long road trips, which most people only do once a year.

And with the speed of charging increasing all the time, it is rare you need to stop for more than 15-20 minutes each time. And usually at a point where you would need to stop for a break anyway.

Of course, if you are driving in remote locations then a hybrid is usually a better bet. But this is not the case for most people.

Electric Vehicles Are Cheaper To Service

There are significantly fewer moving parts in an electric car, so the servicing requirements are also way less.

They do need tire rotations, and there are some fluids that need checking and topping up. However, in general, the cost of ownership is a lot cheaper.

On top of this, because electric vehicles use regenerative braking all the time, the brakes will wear less. The difference to a hybrid vehicle might not be as significant in this respect, compared to a 100% gas car, however, there are likely some differences.

You Can Charge At Home, And It’s Cheaper

Another advantage of electric vehicles that most people don’t mention is that you can charge at home. Unless you are going on a road trip, you can come home each day, plug in your garage, and wake up the next day and drive again. So, no more stopping at the gas station.

And if you have solar on your roof, then you are almost charging for free.

And even if you don’t then electricity is usually cheaper than gas per mile driven. And given the price of gas these days, this difference in price is likely getting even bigger!

Of course, if you have a plug-in hybrid you can also charge at home, but if you drive more than the range of your battery, then you will always need gas. So, in many ways, it’s even more complicated!

There are a lot of arguments about why this is wrong, so let’s break it down to make more sense of it.

Electric car batteries are always on

First off, you have to understand that electric vehicles use their battery all of the time. So, arguing that both have a battery and are equally as good for the environment never makes sense.

Hybrids can only use their battery for 15-60 miles per charge, depending on what type of hybrid vehicle you have. So, if you only do short trips and you always recharge, then they are similar.

However, if you empty your battery in a hybrid vehicle on any given trip, then you are basically running an internal combustion engine car from that point on. Keep in mind it is also a heavier version of a normal petrol car, as it has a battery and all the extras to use to run the car.

There is a lot of incorrect information online about how electric vehicles are either more polluting if you take the manufacturing into account or if you look at where the electricity comes from. The argument goes that electricity that comes from coal or gas is more polluting.

Although it is true that electricity from a coal plant is dirtier, an electric car is way more efficient than an internal combustion engine (ICE) in all ways. For example, some efficient Toyotas have achieved 38% thermal efficiency. That is, 38% of the energy is available from the fuel.

Compare that with one of the most efficient gas turbines from GE which has a 62% efficiency. And then add to that fact that the amount of renewable energy in the grid is increasing at an exponential rate, so these efficiencies are becoming irrelevant.

Renewables In The Grid

For example, in December of 2021, the United Kingdom had 45% zero-carbon energy generation, which is increasing every year. And in the USA it is 20% and growing fast. And depending on which state you live in, it can be even higher.

In fact, in some European countries like Iceland and Norway, there are already over 70% renewables. ANd the other countries in the block are racing to catch them.

So, in the end, the discussion of where your energy comes from and how dirty the “fuel” is in your electric car will become less relevant every year.

Hybrids were the first variant around with most of you knowing the Toyota Prius Hybrid.

A normal Hybrid is basically an internal combustion engine vehicle with an extra electric vehicle drive train added. They use the battery to drive the vehicle when it is charged, and then switch to the combustion engine when it runs out. They have a very limited battery range, often around 15 miles.

Plug-in Hybrids try to improve this situation by having a larger battery with around 60 miles range and allowing the owner to charge by plugging the vehicle in.

Of course, even with a plug-in hybrid (PHEV) you only have a limited range, so if you have a longer commute or drive any distance you are still going to use some gas.