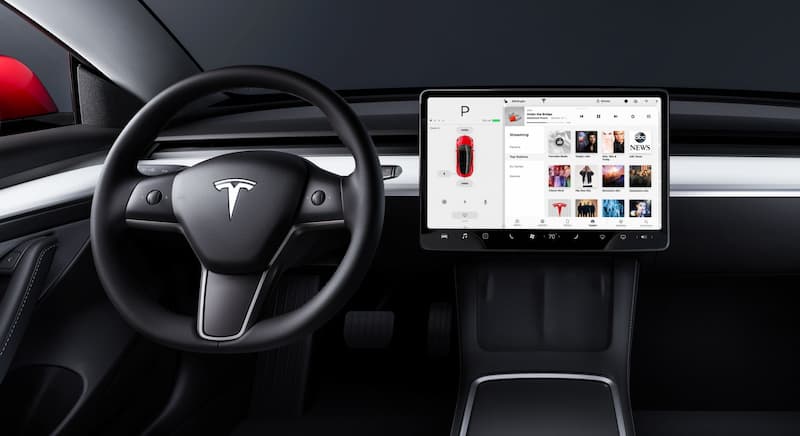 As you probably know, Apple Carplay is the ideal way to connect your iPhone to your vehicle to use all of its great features.

However, for many years now, Tesla owners have been requesting Apple Carplay and have not gotten it.

Does Tesla Have Apple Carplay?

All Tesla models do not currently have Apple Carplay. Instead, you can connect to your Tesla via the Tesla App and control many of the car’s functions from there.

Teslas also do not connect to Android phones using Android Audio, so it is not just Apple fans that will be disappointed.

How To Get Carplay In Your Tesla

Despite there being no built-in way to get Apple Carplay to work in your Tesla, one enterprising Reddit user called Sabertoothstu has found a workaround.

You can follow the original Reddit post via the link above, but this is the gist of how he did it. Not necessarily the most elegant solution, but if you must have Carplay in your Tesla then this is an option:

using a kindle fire 7 to run CarPlay. The micro USB cable plugged in (trying to figure out a way to get that to be less noticeable) is an OTG extension cable that runs to an OTG hub I have in the glove box. Plugged in to the OTG is a 2.4ghz remote if I don’t want to touch the screen to control CarPlay, as well as a CarlinkIT Wireless Carplay adapter. That’s powered from a long microusb cable going to under the arm rest. Cable managed so nothing is seen

Why Is There No Apple Carplay In Your Tesla?

There is no clear answer from either company on why Carplay is not available in Tesla electric vehicles. However, the simplest explanation may be in the technology.

Tesla writes all their own software, even within their company. So, they want full control over the vehicle and everything thing it does. This includes the entertainment system and other features within the car. Of which there are many, and they keep increasing as more Over The Air updates are released.

Apple and Tesla overlap in software in many of these areas, and honestly, I don’t think it makes as much sense for Tesla to adapt to Apple as it does with other manufacturers. The majority of other OEMs use all external software and parts for their screens and entertainment systems, so using Carplay or Android Music is a simple solution for them.

Then there is the small feud between Elon Musk and Apple (and Tim Cook) that might go a long way to explaining why there is no agreement between Apple and Tesla.

It probably started when Elon Musk tried to sell Tesla to Apple back when they were nearly bankrupt, and Tim Cook never even took his call. Musk seems to not have forgotten, as he has mentioned it on Twitter at least twice.

And Elon continues to mock both Apple and Tim Cook both on Twitter and even during Tesla Earnings calls where he has taken aim at Apple’s use of walled gardens to reduce competition. Elon is renowned for trying to keep things fair and for only charging what is necessary for Tesla products. This is in many ways the opposite of what a premium brand like Apple does.

So, whether it is the tech or the feud holding back Apple Carplay, no one can really say. However, I don’t personally see it ever coming to Teslas.